You are viewing the admin subdomain

Use the following link to publicly share this page: https://theworld.org/stories/2015-09-29/why-young-north-koreans-are-dari... 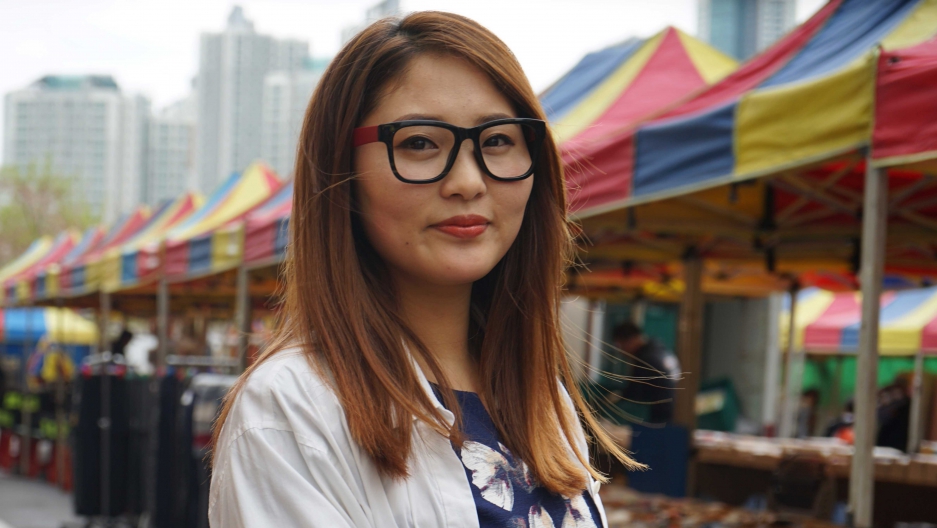 24-year old North Korean refugee Danbi was a smuggler in North Korea's black markets.  Here she gives us a tour of a market in South Korea, which reminds her of the markets in the North.

Would you wear skinny jeans if they were illegal?  As it turns out, the answer is yes, at least for one young North Korean woman.

Danbi and I are browsing through a South Korean market, when she stops to admire a pair of slim fitting pants. “Girls just love these back home!” she declares. By home, she means a city in far-off North Korea.

She flips her hair dramatically, and laughs heartily, as she tries on a sparkly hair clip. She recalls, “We all wanted to be able to run our fingers through our hair like this. Like we saw in a South Korean TV show. But we couldn't. Because we didn’t have enough shampoo in North Korea, so your fingers would just get stuck!”

Danbi is a 24-year-old North Korean refugee, who paints a picture of the totalitarian regime that’s quite different from the one we’re used to seeing, but an account supported by other defectors and those working with North Koreans. Yes, the country is rife with human rights abuses and grinding poverty. But Danbi, who took on her new name after fleeing, is from a city near the Chinese border — which has become surprisingly porous, and so she’s grown up in this presumably closed nation with a window to the outside world.

She says she shopped in black markets with smuggled foreign goods and watched American and South Korean TV shows, via smuggled USB sticks, since she was a kid. So by the time she entered junior high, Danbi says what she learned in school — that Americans can’t be trusted and South Koreans are poor — she doubted its truth. 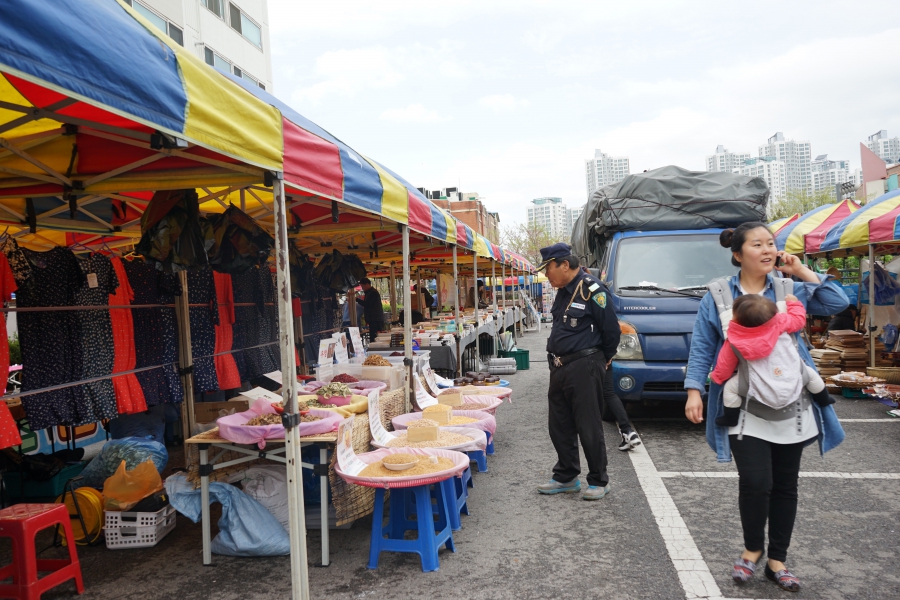 So she started skipping class and started smuggling goods across the now porous border. She sold North Korean mushrooms to Chinese merchants, and brought back crates of rice, flour and other goods.

Now Danbi was probably a lot more daring and enterprising than your average North Korean teen. But she is part of a generation of North Korean millennials who were kids during the country’s devastating famine of the 90s. So young people like Danbi didn’t look to the country’s dictators to provide in the way their parents did, nor did they respect the government's rules. 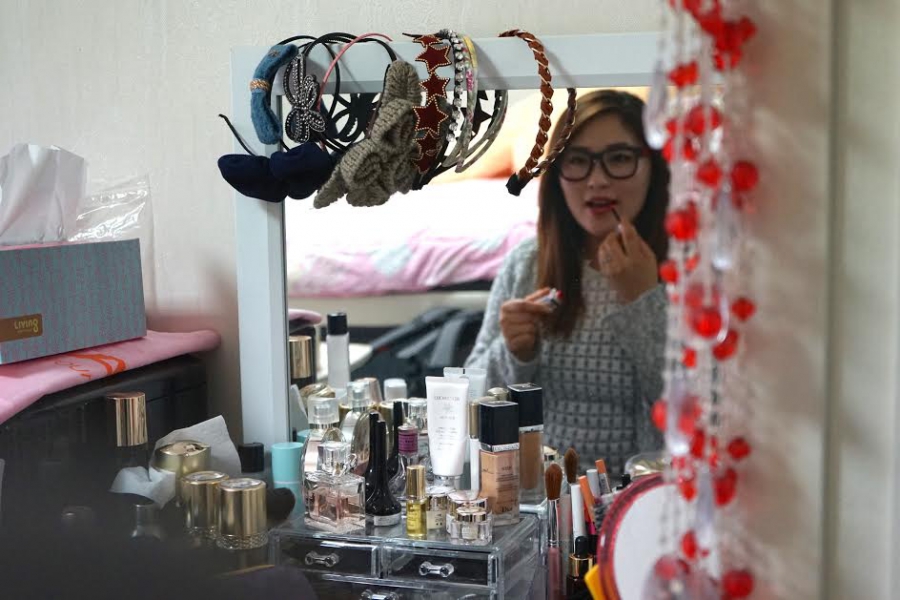 North Korean refugee Danbi in her South Korean apartment, getting ready to go out.  In North Korea, youth informants patrol the streets, to report young people who violate the country's dress codes.  Jeans, which are popular in South Korea, were seen as a symbol of American imperialism in the North.


She’s otherwise confident and even-keeled, but her voice rises suddenly when asked about the country’s leadership. “We see their large bellies, while the rest of us are hungry. We know it’s not fair,” she says sharply, her inflection slipping into a North Korean accent.

I’m struck by how much Danbi sounds like an American teen. She questions authority and brags about skirting the country’s dress codes as a teenager in North Korea. She tells me about the time she was caught by youth informants for wearing a form-fitting outfit, which had been smuggled from the South.

“They draw a line on the street, and make you stand there, while they tear at your clothes as people walk by. To make an example of you,” she explains. Jeans were seen as a symbol of American imperialism—and girls caught wearing them would have holes punctured in them to keep them from being worn again. Hair that was too long was also cut on the spot, she says.

Danbi adds that if you’re caught five or six times, that’s when you’re sent to do forced labor, unless you have the connections and resources to pay a bribe. 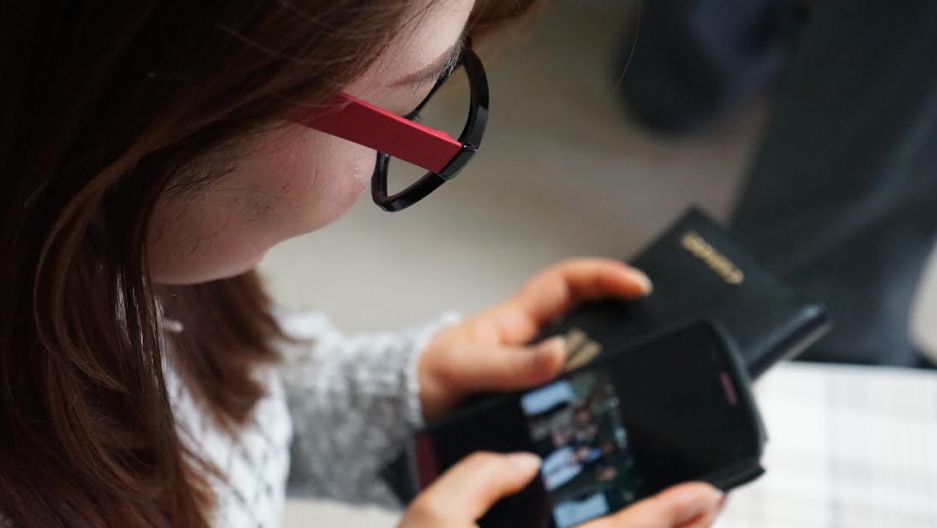 24-year old North Korean refugee Danbi swipes through photos on her mobile phone.  She has no contact with family back home, she says.  But some North Korean refugees continue to communicate with their families in the North, via care packages and smuggled Chinese cell phones.

“In North Korea, so many things can be resolved if you have enough money now,” she insists. “We depend on the black markets for our survival. All of the work, smuggling goods, selling goods, getting officials to turn their backs, that’s all done through money.”

Still most North Koreans live in extreme poverty. Electricity is limited to a few hours each day, food and running water can be scarce, and the daily threat of forced labor camps — or even harsher punishments—is real.  But Danbi saw the difference it made to have access to the outside world.

She recalls, “We had neighbors with relatives in the South, and suddenly they started doing a lot better, since their family started sending money back. At one point, my mother even joked, why don’t you disappear and send some money back for us, too.”

According to the NGO Liberty in North Korea, North Korean refugees routinely send money back to North Korea each year. Those who can afford it are also said to communicate with their families on a regular basis, via care packages and smuggled cell phones.

Danbi escaped to South Korea four years ago — after learning she was being investigated by the North Korean government, and she couldn’t bribe her way out. Now she’s married to a South Korean man, and what she says she misses most about North Korea — is working the black markets, and the family she left behind.

Our coronavirus coverage has never been behind a paywall.

The World is a public radio program that crosses borders and time zones to bring home the stories that matter.

The story you just read is freely available and accessible to everyone because readers like you support The World financially.

Thank you all for helping us reach our goal of 1,000 donors. We couldn’t have done it without your support. Your donation directly supported the critical reporting you rely on, the consistent reporting you believe in, and the deep reporting you want to ensure survives.

DONATE TODAY > No thanks